Lola Fariñas, 29, from Spain is a Ph.D. student at the Spanish National Research Council (CSIC) in Spain.

Her research is about characterization of vegetal tissues using ultrasonic techniques, specially air-coupled and wideband.

Lola is a participant of the 66th Lindau Nobel Laureate Meeting which is dedicated to the field of physics in 2016.

Enjoy the interview with Lola and get inspired:

While I was doing the final project for my Telecommunication Engineering degree, I did an internship in a big telecommunication company. It was then when I realized that I wasn’t really interested in keep working in that way. I was willing to keep learning from the point of view of Science and I was always curious about biology. So… here I am 🙂

Although it may seem advantageous, my current supervisor is a good role model for me. He has worked for years in his ultrasound research but he applied it in a wide range of different topics while avoiding getting stuck. This is both rewarding and inspiring. Also, in spite of the increase in other tasks different from science itself when you get a position promotion in academia, this hasn’t pulled him away from working at lab.

Well, I was always interested in scientific and technical subjects at high-school. Then, I decided to study Telecommunication Engineering. While I was at uni, of course I acquired lots of technical skills that I use everyday, but I missed the deeper learning based in physics and biology. So, I decided to apply for a Master Degree in Biomedical Engineering. This program was focused in research. After I completed, I was lucky enough to get a grant from my government to do a Ph.D. at my current lab based on the characterization of vegetal tissues using ultrasounds. it sounded perfect for my concerns, didn’t it?

It was called: SOST-WINE. It was a collaboration between our group in ultrasounds, a group of ecophysiologists and a winery. The main aim was develop an ultrasonic portable system for measuring grapevine leaves in the field. These measurements are based on Non-Contact Resonant Ultrasound Spectroscopy. Using this technique, ultrasonic parameters linked to physiology values related to the water state of the plant can be obtained in a non-destructive, non-invasive and rapid manner. During this project, we learnt quite a lot about how leaves react to abiotic factors such a light, temperature and watering even during days since we are able to monitor leaves attached to the plant continuously. By the end of the project, new research lines opened in order to use all these data for irrigation management, productivity in crops, biomass control, etc. 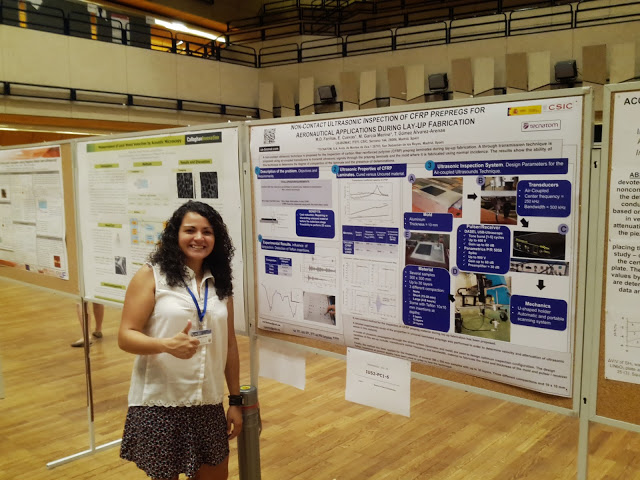 Well, I felt pride in my work as a part of a collaboration with many others when I re-read some papers already published. Nowadays, I am getting slides ready for my Ph.D. viva, and while I am trying to summarize everything in order to explain it, I really feel pleased what all we have done so far. Additionaly, many more questions come to my mind suggesting new experiments to go further. It’s great.

Right now, my daily life is not interesting at all since I am finishing my Ph.D: I wake up every morning, I pat my flatmate’s dog until she let me get into the bathroom. Then I have breakfast, grab my bike and ride to the lab. After that, I sit at my desk in front of my thesis draft during LOTS of hours until evening, when I go to the gym for some workout. Then I ride back home, have dinner and go to bed. Despite all these sound terribly boring, I’d say to potential Ph.D. students: this routine only happened to me last few months. Don’t be afraid!

What I’ve always sought, I guess: be exceptionally good doing something. Malcolm Gladwell said that those who have practiced more than 10000 hours achieve mastery in that field. I want to reach virtuosity in something too! Research is a good option to be good at.

I like doing sports: I used to play in a handball team – I owe quite a lot to it, by the way – but when I grew up, my responsibilities grew at the same time so I began to run and workout on my own which is easier and quicker but definitely less fun than belong to a team. Probably what I enjoy the most is traveling around with a few friends. Also, I do love watching movies and TV-series. Recently, I become interested on reading biographies of remarkable people. Ah! and talk. I talk a LOT! (probably depending on who you ask, they would say that I talk too much haha)

Well, I don’t think I may give a valuable opinion on this due to the fact that my career in Science is quite short so far. So, what I can say it is the same that I would say to men: if you are curious about Science, if you have prepared for it or even if you wanna have a try: go for it! Life is often longer than we think, so from time to time we can risk: even if we are wrong we will rectify. This will cost one or two years of our life? That’s not a lot!! Try it if you really want it.

What should be done to increase the number of female profs of physics?

Unfortunately, I don’t have a good answer for this question. But I’d like to make a general reflection on this. Recently, I was attending a workshop. Due to the field (??), there were many more men attendants than women. I was surrounded by a couple of women and one man at the main dinner. These women agreed that their works were accepted on this and other conferences just because their gender -in a kind of parity action -. The man close to us, was chief and he assured that there was a double-blind process to select works for their quality without any other considerations. I’ve told this story because I found it really sad: these women were completely sure that each time they submit a proposal for a conference they are admitted due to their gender and not because their hard work and quality. I bet that no man thinks the same if his work is accepted. So, at this point it worries me how particular arrangements may damage women self-confidence on their work.