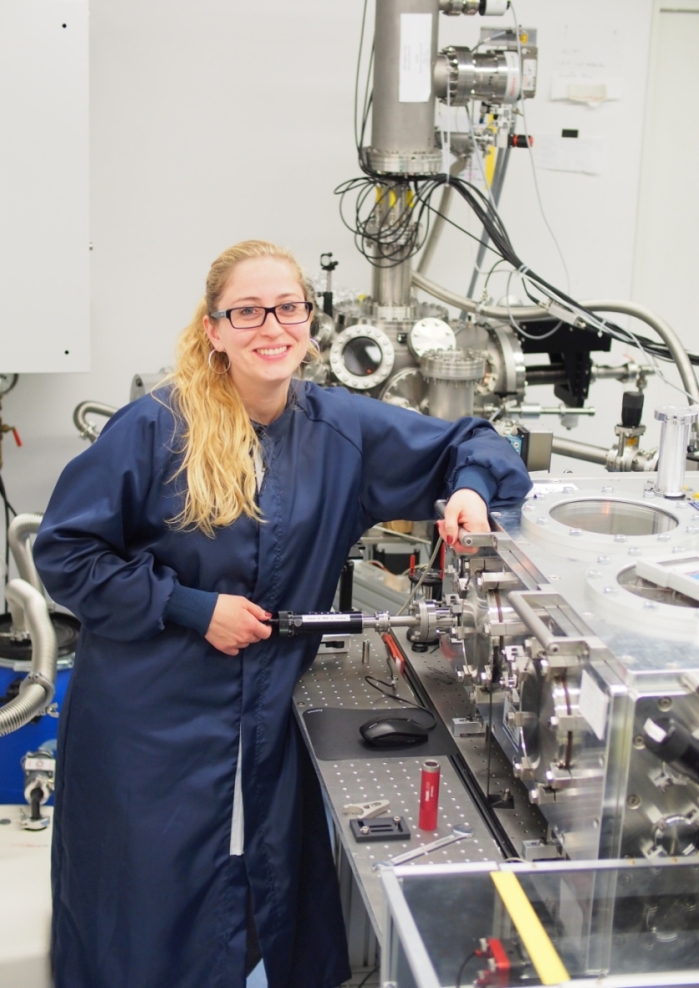 Birgitta Bernhardt, 35, from Germany is a Postdoc at the Technical University of Munich in Germany.

Her research is about laser spectroscopy. She uses the interaction between light and matter to learn more about the detailed composition of atoms, molecules and solids and she can perform time-resolved measurements to catch the ultra-fast motion of electrons in her probes.

Birgitta is a participant of the 66th Lindau Nobel Laureate Meeting which is dedicated to the field of physics in 2016.

Enjoy the interview with Birgitta and get inspired:

Beautiful phenomena like a rainbow during a summer thunderstorm fascinated me and I wanted to know in detail how they become possible.

One of the persons who impressed me most is my grandmother: after being forced to quit school after four years only in order to help her parents in the family inn, she led a very multifaceted and successful life first as executive housekeeper, cook and later as post office leader.

Mainly luck accompanied me so far. I joined Ted Hänsch’s group 3 months before he won the Nobel Prize in physics in 2005 and I got the chance to work with laser frequency combs on my PhD project in his group. Afterwards I could spend two inspiring years at the Lawrence Berkeley National Lab with Stephen Leone and Daniel Neumark thanks to the Alexander von Humboldt foundation. With a return fellowship, it was possible for me to continue my studies on ultrafast spectroscopy in the group of Reinhard Kienberger at the Technical University of Munich where I still am.

I met some challenges during my PhD where my project proved to be very complicated and the supervision was arranged such that independent work was one of the main goals. This sometimes meant difficult times when I ran out of ideas, however, this circumstance is also one of the lessons I am most grateful for because I learned not to despair and to always have a plan B. Or C.

Exactly my difficult PhD project with the “green cavity” is my coolest project so far because it was the prettiest to look at: The cavity enabled high laser powers in the visible green region that accelerated dust particles along its beam path. It was a neat spectacle that I could watch for hours without getting bored.

I wouldn’t say that I feel particularly proud of accomplishments because they typically come after a lengthy struggle and when something is finally in shape to be shown to other researchers you had much time to get used to the fact that it was actually achieved. I much rather feel lucky and privileged to have a job that is so much fun.

I wish to find a position for myself that allows me to continue to do research that is driven by new ideas rather than by commercial interests and continue to explore fascinating phenomena with lasers.

Making and watching movies, traveling to new and known places, playing with my son.

When I started my studies I was intimidated by the apparently knowledgeable male study mates. Only later I realized that many of them only pretend. So I think my main advice would be: Try not to be intimidated. And my second one is: Try to do Family AND Job, it is possible and worth the struggle…

It is a question of perspective but I, as a laser physicist, am convinced that lasers will be involved! It could be optical switches that make computers faster or portable laser frequency combs that for example make your wrist watch even more precise than state-of-the-art atomic clocks.

What should be done to increase the number of female profs of physics?

Being too proud for a female quota or similar measures, I think we “just” need to be patient: the amount of female students in physics is steadily increasing for years. It will take quite some time until this increase reaches the professor appointments at German universities but I think it will come.