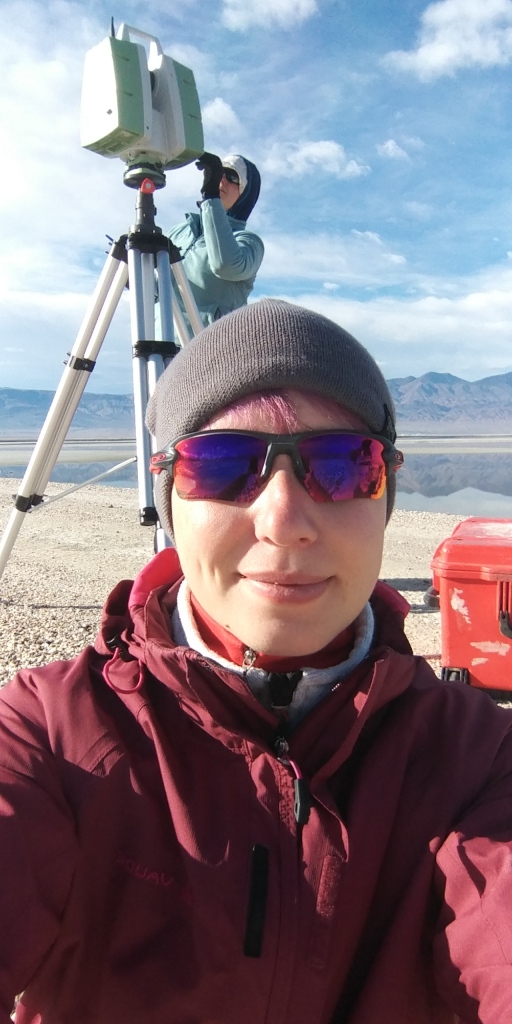 Jana from Austria is a Jana is a postdoctoral researcher at the MPI for Dynamics and Self-Organization in Göttingen, Germany.

Her focus of interest are the iconic hexagonal patterns that often form in salt deserts, such as the Death Valley. She tries to uncover the driving mechanism of this pattern formation process, using both numerical simulations and experiments in the lab as well as organizing field studies to research the patterns in nature.

Jana will participate in the 69th Lindau Nobel Laureate Meeting.

Enjoy the interview with Jana and get inspired:

I went to a Waldorf school in Austria which is a private school that focuses on education in art and craftsmanship a lot. During my time in school, I engaged in a lot of vocational activities such as martial arts, learning instruments and a fourth language. I was always pretty good in math but my school did not really encourage us to follow a scientific career. Particularly my physics education in the last two to three years of high school was next to non-existent due to fluctuating and really bad teachers. Therefore after I finished my high school graduation, I had the feeling I knew everything except physics. For me the logical next step was to study the thing I knew the least about (which made achieving the Bachelor’s degree rather hard for me). Additionally, I also didn’t really want to decide what to do with my life. Physics seemed like the field that opens the most doors and career paths. So that was a nice fit.

I think I don’t have specific people as role models – rather groups of people or professions that I associate a specific trait with that I admire. I admire entrepreneurs for their courage to go out into the world with their own idea and their own plan and just do it. I admire athletes for their dedication and discipline and I admire nerds and hackers for their drive to go to the bottom of things and really understand. These are traits that I aspire to.

I just finished my PhD in a fluid dynamics and geoscience related topic at the Max Planck Institute for Dynamics and Self-Organization. As already mentioned, the greatest obstacle I had to overcome was my lack of knowledge when I started by Bachelor’s degree at the University in Göttingen. I had to re-try many exams and was constantly doubting my ability to succeed and become a physicist. What really helped me there was my curiosity for almost everything. I just needed the time to learn things properly and catch up. Nevertheless in the middle of my Bachelor’s I was quite convinced I would not do a master’s yet a PhD. Around that time I randomly met Eleni Katifori and joined her research group at the MPI for Dynamics and Self-Organization to do my Bachelor’s and later also my master’s thesis. The experience that I was able to contribute something useful to a research group and that my input was valued led me to continue with my studies. After my master’s I wanted to try something new again (my Bachelor’s and Master’s was mostly programming). Therefore I picked a PhD project that required me to do experiments and even a field campaign. Again I found a great supervisor, Lucas Goehring, who helped me acquire the new skills I needed for my project and in general gave me lots of freedom to pursue my own ideas and side-projects. During my time as doctoral researcher I developed a series of lectures on programming and data science together with a couple of colleagues. We got a grant to implement data science education at the university of Göttingen based on these lectures, and this is what I am doing now – next to a PostDoc at my research institute.

Definitely my field research. I planned two trips to salt deserts in Central California (Deatch Valley and Owens Valley) and conducted research there. We had to travel mid winter so the temperatures in the deserts would be somewhat bearable. Getting two weeks of sun in German winter (while being paid) is just awesome! Next to that, planning a field campaign is a challenge on a very different level: one has to make sure to get the most out of the very limited and expensive time at the research location in the field. Every hour and every experiment is carefully planned – but of course nature tends to mess with careful planning and one needs to be creative on the spot as well. I really enjoyed this experience and would always repeat it again!
The other is the project “Daten Lesen Lernen” I am working on right now. Together with colleagues from the center for statistics in Göttingen I develop a new curriculum to teach “Data Literacy” to all the students at the University: from the acheology to the enonomy student, from the biologist to the sociologist, they will all have the possibility to learn a little bit of programming, data visualization, statistics and critical interpretation of data analysis early on in their studies. My duties there involve both the development of teaching materials as well as the coordination of the whole project and outreach to gather and spread best practices. I really like the great freedom I have there to pursue my ideas and the diversity of my activities.

During the last year of my PhD I also served as the Spokesperson of the Max Planck PhDnet, the representation of over 5000 doctoral researchers of the Max Planck Society. This position comes with a lot of responsibility and work and is nearly a full-time job in itself. I managed to finish my PhD on time while making some contributions to the representation of PhDs that truly have an impact. When I was elected for the position I had my doubts whether I would be able to manage the immense workload. In the end it worked out and was the greatest and most intense year I had in my life so far. I am very proud that I had the courage to embrace that challenge.

I get up rather early to go to the gym. Working out alone clears my mind and arriving at work with the workout already done just feels terribly good. I arrive at work (either my office at the university or at the MPI for Dynamics and Self-Organization) around 8:30-9:00. As my colleagues usually don’t arrive until after 10:00, I use the first quiet hour to get some work done, often writing for a paper or grant application. Around 10:00 I enjoy an extended coffee break with my colleagues where we often discuss our current projects and brainstorm ideas. After that I do my mails and administrative tasks until lunch, since the office is rather busy which makes it hard to concentrate. In the afternoon I get some research done or attend one of the numerous talks on my campus. My research is very diverse: sometimes I spend my afternoon in the lab and analyze samples I brought from the field, sometimes I set up a new set of numerical simulations and other times I analyze data from the simulations or the lab and make figures for the publications. In the afternoon I usually go for a walk with colleagues and then return to do some more writing or planning of experiments or simulations. In the early evening I very often have a Skype call with one of the working groups from the PhDnet where I am still somewhat engaged. At night I either hang out with friends or cook something nice and huddle on the couch with a good book.

I am striving to have an occupation which allows me to learn new things and explore interesting ideas on a regular basis. I also need possibilities to challenge myself and get out of my comfort zone. Next to that I want to contribute to the society around me and do something useful. I have the feeling that I grew up in a very privileged environment which made it rather easy for me to get the education I have now and I want to give something back. I decided to follow a path that leads me deeper into the academic life. My next step will be a PostDoc position where I hope to combine my passion for Data Science and my wish to work on something closer to application.

I really like voluntary work which gives me the possibility to do something that feels “useful” while working with other engaged and motivated people. Next to that I really like to hang out with friends and enjoy a good meal, a cool beer and a philosophical discussion. When the amount of people and interactions around me gets too much, I like to clear my mind by working out, going for long walks or even spending some time hiking in the mountains (preferably in my home country Austria).

I don’t know if my advice for women would be any different than my advice for men, nevertheless I am happy to give it: physics is not magic. Studying physics is hard work fueled by curiosity and takes time. Don’t be discouraged if you fail exams or don’t understand something at first glance. Find a circle of friends and colleagues who support each other and go out to have some fun every once in a while. And last but not least: do what you enjoy doing, the success will follow.

In my opinion, the next great breakthrough will be of applied rather than theoretical nature. Batteries are becoming an increasingly integral part of a decentralized energy infrastructure, which relies on renewable energies to a large degree. This requires batteries with a high energy density and many charging cycles, made of materials which are common and not hugely poisonous. The most promising approaches in that regard lie in the field of solid state batteries. The capability to produce such batteries will play a key role in transforming our energy production and management away from fossil fuels and towards a sustainable solution.

What should be done to increase the number of female scientists and female professors?

I think that the discouragement young women experience when it comes to the natural sciences happens very early on. It starts with gendered toys (not a good idea), continues with the notion that there are activities which are more “boy-like” or more “girl-like” and ends with very low numbers of girls being interested in starting to study natural sciences after finishing their school education. Changing this needs awareness and effort in school, starting at first grade, in families and in (pop)culture in general. Featuring more female role-models working in STEM-fields is certainly a good start.